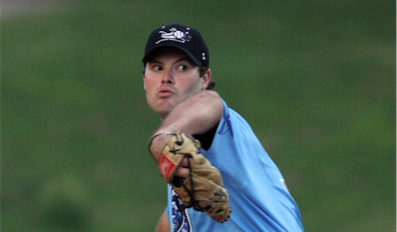 DURHAM, N.C.- After a successful 27-game stint in the American Association, Sioux City Explorers RHP Kevin McCanna (pictured) is making his way back to affiliated baseball. McCanna’s contract has been sold to the Arizona Diamondbacks, who will assign him to one of their short-season clubs — either the Short Season Class A Hillsboro (Ore.) Hops or the Rookie-level Missoula (Mont.) Osprey.

In his 2017 season in Sioux City, McCanna has worked primarily from the bullpen. Over his 27 appearances, 25 have come in relief. McCanna has compiled a 5-0 record and 2.95 ERA, striking out 51 hitters in 39.2 innings.

McCanna’s two most recent appearances have come in a starting role. He picked up the win July 21 at the Gary SouthShore RailCats when he allowed just two hits and a walk over five shutout innings. McCanna struck out eight in a 10-0 Explorers win. That start was the final outing of six straight in which McCanna did not allow a run, a streak that began on July 8 when he picked up the win with 1.1 scoreless innings at the Kansas City T-Bones.

The native of The Woodlands, Tex. also earned a win against the RailCats on June 11, when he limited Gary SouthShore to one hit and one walk over three innings. His first two victories of the year came on consecutive nights against the Sioux Falls Canaries on May 26 and 27. On the 26th, McCanna struck out two in a scoreless inning, and needed to retire just one batter a day later another win.

Before coming to Sioux City, McCanna spent two years in the Houston Astros system. He was 3-3 with a 3.72 ERA in 2015, pitching with the Short Season Class A Tri-City (N.Y.) ValleyCats of the New York-Penn League. McCanna struck out 32 and walked only eight in 38.2 innings. His 2016 season was split between the Class A Quad Cities (Iowa) River Bandits of the Midwest League and the Class A Advanced Lancaster (Calif.) JetHawks of the California League. Between the two stops, McCanna was 4-4 with a 3.99 ERA, striking out 84 in 97 innings.

A 22nd-round pick of the San Diego Padres in the 2012 Major League Baseball Draft, McCanna turned down the offer and attended Rice University. He helped the Owls to three NCAA Tournament berths, and was picked by the Astros in the 13th round in 2015.

The Explorers will host the Winnipeg Goldeyes in a doubleheader tonight. Game one begins at 6:05 p.m. Central time at Lewis & Clark Park. The doubleheader can be seen live and for free at www.americanassociationbaseball.tv.