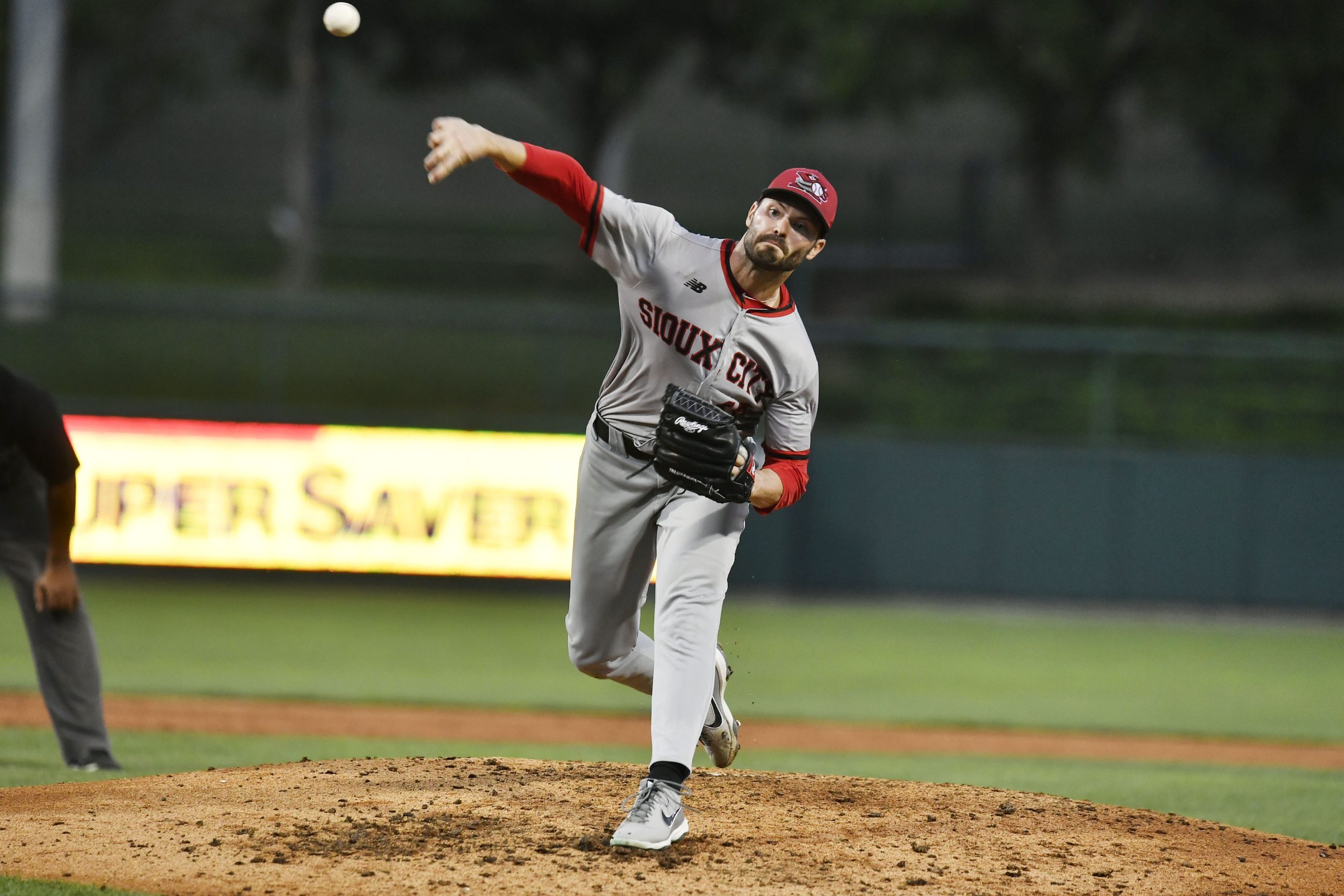 The Kane County Cougars scored nine straight runs after falling into a 13-3 hole, but the comeback effort came up just short as the Lake Country DockHounds held on for a 13-12 victory on Tuesday night at Northwestern Medicine Field.

Trailing 13-3 entering the bottom of the sixth inning, Dylan Busby got the rally started with a solo homer to make it 13-4. In the bottom of the seventh the Cougars (32-32) added a five spot. Alexis Pantoja led off the frame with a walk before later scoring on a wild pitch. Later in the inning, Galli Cribbs Jr. drove in two more runs with an RBI double to make it 13-7. Jimmy Kerrigan then hit an RBI single and Nick Anderson an RBI double to make it 13-9 heading into the eighth inning.

The score remained 13-9 heading into the bottom of the ninth. Busby and Sherman Johnson drew two straight walks to start the frame. After back-to-back groundouts, BJ Lopez blasted a two-out, three-run homer over the left field fence to pull the Cougars within one run at 13-12. Following Lopez’s homer Ernie De La Trinidad singled and Cribbs walked to put the winning run on base. However, Lake Country reliever Robert Gonzalez induced a fly out from Josh Rolette to end the ballgame.

The DockHounds (23-40) jumped out to an early lead against Cougars’ starter Vance Worley (5-6). After Jordan Schafer reached on a single, Gio Brusa launched a two-run homer to put Lake Country ahead 2-0.

Kane County struck back to take the lead against DockHounds’ starter Angel Ventura (2-2). The Cougars plated a run in the bottom of the first on a sacrifice fly by Jimmy Kerrigan. In the bottom of the second, Sherman Johnson belted a solo shot to tie the score at two. In the next frame, Kerrigan and Busby hit back-to-back doubles to give the Cougars a 3-2 edge.

After the Cougars took the lead, Worley settled into a groove. The right-hander allowed no runs on just three hits from the second through the fifth inning. However, Lake Country responded in a big way in the top of the sixth inning. With two outs, the DockHounds had 12 straight hitters reach base to score 11 runs. The DockHounds scored on a two-run homer from Lamar Briggs, an RBI single from Jordan Schaffer, a three-run homer from TJ Bennett, a three-run homer from Gabriel Noriega, and a two-run double by Daniel Molinari.

Following the big inning from the DockHounds, Ben Allison provided solid work out of the bullpen. The right-hander did not allow an earned run and had four strikeouts against just one walk.

The Winnipeg Goldeyes (35-28) lost 3-2 to the Chicago Dogs at Shaw Park on Tuesday night.

The Goldeyes took a 1-0 lead in the bottom of the second inning on three consecutive one-out singles from David Washington, Logan Hill, and Reggie Pruitt Jr.

The Dogs (42-20) tied the game in the top of the third.  Michael Crouse led off with an infield single, stole second, and scored on a two-out, RBI single from Stevie Wilkerson.

Connor Kopach put the Dogs in front in the top of the fourth with a solo home run to left.

The Goldeyes answered in the bottom of the inning when Washington hit a solo home run to centre that tied the game at 2-2.  It was Washington’s 20th home run of the season.  With Max Murphy having hit 22 home runs so far in 2022, it marks the third time in franchise history the Goldeyes have multiple 20-home run hitters in the same year (1998, 2007).

Chicago took the lead again in the top of the fifth.  With runners on first and third and two outs, Stevie Wilkerson stole second base.  On the ensuing throw to second, KC Hobson scored on a delayed steal of home.

Ryan Clark pitched two perfect innings over the seventh and eighth in relief of Kipper, while Brian Schlitter escaped a first and second, one-out jam in the bottom of the ninth to earn his sixth save.

Jhon Vargas, Travis Seabrooke, Bryan Blanton, and Erasmo Pinales combined for three shutout innings in relief of Bourassa.  Pinales struck out the side in order in the top of the ninth.  Raul Navarro singled in the bottom of the third to extend his hitting streak to 16 games.  Washington has hit safely in eight straight.

The Kansas City Monarchs (41-22) pitching staff was on full display Tuesday night at Legends Field. They threw a combined shutout in a 1-0 win over the Sioux Falls Canaries (24-37).

Matt Hall started on the bump for Kansas City. He kept the Canaries off their rhythm all night. Hall earned a quality start, threw six scoreless innings, and collected seven strikeouts. The left-hander also allowed just three hits during his tenure.

The Monarchs threatened in the second inning. With two outs, Pete Kozma roped a line drive down the left field line for a stand-up double. Alexis Olmeda followed up Kozma’s at bat with a walk. Willie Abreu dug in and hit a soft chopper up the middle which he beat out for an infield single. Kansas City was unable to bring in any runs and after two innings of baseball, the game remained tied at zero.

The Monarchs finally broke the tie in the bottom of the fifth. David Thompson worked a walk to bring up Matt Adams. The designated hitter hit a towering fly ball that dropped out in no man’s land in right-center field. Thompson’s heads-up baserunning brought him to third base. Casey Gillaspie followed up the at-bat with a sacrifice fly to center field to score Thompson and give the Monarchs a 1-0 lead.

Willie Abreu had a sensational night. He finished his night 3-4 from the plate and accounted for three of the Monarchs seven hits. Abreu was also impressive in the field as he made a spectacular diving catch towards the left field line in the second inning.

Jameson McGrane toed the rubber for the Monarchs in the ninth inning. With two outs, McGrane struck out John Nestor to end the game and earn his 12th save of the season.

The RedHawks opened the scoring in the bottom of the first inning with a RBI double by Peter Maris, his first of four on the night. However, the lead wouldn’t last long as Sioux City scored three in the top of the second inning on two singles, a double, and two walks.

In the bottom of the third inning Maris hit a two-run home run well over the right field wall to tie the game. Explorers’ starter Kevin McCanna gave up three runs in the first two innings, but settled down after the third inning and allowed eight hits and a walk with three strikeouts in 6.2 innings pitched.

The game settled down after the third inning, but in the fifth inning Danny Amaral hit a leadoff triple and eventually scored off of a Blake Tiberi RBI single to take a 4-3 lead. RedHawks starter Kevin McGovern allowed four runs on eight hits and three walks while striking out two in 6.1 innings pitched. Luke Lind and Joe Jones came in for McGovern and pitched a combined 1.2 scoreless innings in relief.

The game remained 4-3 until the bottom of the eighth inning when shortstop Sam Dexter hit a two-run single to give the RedHawks a 5-4 lead. RedHawks relief pitcher Alex DuBord came in for the save in the top of the ninth. But the lead was short lived again as the Explorers scored four runs in the top of the ninth off of three hits, a walk, and a hit by pitch. DuBord (1-1) earned his first loss of the season after allowing the four runs in the last frame.

Sioux City pitcher Brandon Brosher (3-2) earned the win despite allowing two runs on three hits and a walk in the bottom of the eighth inning. Thomas McIlraith allowed a Peter Maris solo home run in the bottom of the ninth inning but earned his 13th save of the season.

Jason Rogers hit an RBI double in his Saltdogs debut, Garett Delano allowed one run over five innings, and the ‘Dogs beat the Milwaukee Milkmen 2-1 in five innings at Haymarket Park on Tuesday night.

Rogers, an ex-MLB’er, gave Lincoln a 2-0 lead in the 1st inning off his former Pittsburgh Pirates teammate A.J. Schugel. Lincoln (31-33) took a 1-0 lead on a double-steal when Hunter Clanin broke from third base on Ryan Long’s initial steal attempt.

Lincoln didn’t have another hit, but Garett Delano allowed just one run on Dylan Kelly’s solo homer in the 5th. Milwaukee (32-31) stranded the bases loaded and left five runners on in total.

The game was delayed with two outs in the 6th. After a one-hour, 12-minute delay the decision was made to call the game.

The Cleburne Railroaders gave the Gary SouthShore RailCats a tough test down the stretch, but the visitors came up clutch in the late stages to pull out a 10-8 series-opening victory.

The RailCats countered every blow the Railroaders could come up with and matched Cleburne’s offense at every turn to keep them at a distance all game long.

It did not take long for Gary SouthShore to kick off the scoring as they got their lineup going in the very first inning.  Michael Woodworth ripped a one-out triple, and following a Victor Nova walk, the duo pulled off a delayed steal of home to plate the contest’s first run.

Cleburne fought back immediately in the bottom of that inning and took the lead themselves.  Chase Simpson hit a two-out, two-run home run to put the Railroaders up 2-1.

However, their advantage did not last very long, as the RailCats fired back in the top of the second.  LG Castillo reached on an error and Tom Walraven singled, setting up Sam Abbott to launch a three-run shot, his 12th home run of the season, placing the RailCats ahead 4-2.

After both teams exchanged zeros in the third inning, the RailCats used the home run ball once again to add on in the fourth.  Walraven drove a leadoff home run over the left field wall, handing Gary SouthShore a three-run advantage.

Though the Railroaders got a run back in the fifth, Walraven restored it in the top of the sixth.  His second solo home run canceled out a run-scoring single, restoring the RailCats edge to three at 6-3.

Once again, Cleburne got a run back in the bottom of the sixth as an RBI groundout drew them back within two, but the RailCats responded by tallying two runs of their own in the top of the seventh.  Nate Scantlin got hit by a pitch and immediately stole second before Woodworth’s second triple of the game brought him home.  Nova delivered a base hit one batter later which scored Woodworth, positioning the ‘Cats in front 8-4.

For the third consecutive frame, the Railroaders cut into their deficit through a seventh-inning sacrifice fly, but Gary SouthShore’s plate discipline set them up for a two-out rally in the top of the eighth.  Abbott and Chris Burgess worked tough two-out full count walks, and a misplay on a Jackson Smith hard groundball made it pay off right away.  Both base runners came around to score, extending the RailCats lead to 10-5.

Nick Garcia worked around an error to open the bottom of the eighth to fire a scoreless frame to set the RailCats up three outs away from a win, but the Railroaders refused to go down without a fight.  Three straight one-out hits produced two runs, leaving runners at the corners and the tying run at the plate, but Yeison Medina came out of the bullpen to save the day.  He got the final two outs in succession to hammer finish Cleburne off and secure the victory.