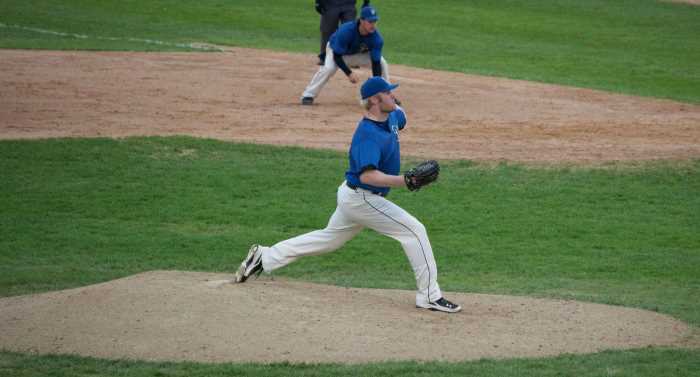 St. Paul 2B Dan Kacrzrowski scored 1B Ole Sheldon with a fielder’s choice in the 11th inning to help the Saints knock off Winnipeg in 11 innings. The Saints grabbed an early lead but needed to fight back in the ninth inning to force extra innings. The Saints led 4-3 after two innings and 7-4 after five innings, but a four-run Winnipeg rally in the sixth gave the Goldeyes an 8-7 lead.

With one-out in the ninth, C Dwight Childs doubled and SS Adam Frost hit a two-out triple to keep the Saints alive. Winnipeg C Luis Alen singled in the tenth, but a double play helped Saints’ closer Matt Meyer (pictured) get out of the inning unscathed. Meyer (4-3) returned for the bottom of the eleventh and turned in a second scoreless inning to lock down the win.

3B Amos Ramon and 1B Casey Haerther each had three-hit games for the Goldeyes. Ramon’s day included a home run, three RBI and three runs scored. For the Saints, Frost and Childs each had three hits.

The Bears jumped out to a 2-0 lead in the second inning and never looked back in a 4-1 road win at Amarillo. In the second, C Kyle LaFrenz drove in a run with an RBI single, and DH Danny Lackner brought him home with a double to right field. LaFrenz led all batters with three hits, two RBI and a run scored.

The Sox got a run across in the fifth, with 3B Brandon Jones’ solo homer, but Newark starter Leondy Perez (4-3) allowed little else. Perez kept the Sox to one run on five hits in seven innings, striking out three and walking one. The Bears tacked on two insurance runs in the top of the ninth before Jorge Vazquez entered the game to notch his first save.

Sioux Falls DH Tim Pahuta, the American Association hitter of the month for June, continued to mash, driving in four runs in a 7-1 win at Kansas City. With the game tied at one in the fourth inning, C Jared Clark singled in the go-ahead run, and then Pahuta broke the game open with a three-run homer. The Canaries also got contributions from LF JP Ramirez, who homered and scored two runs while batting 3-for-4, and C Jake Taylor, who led all batters with four hits.

Sioux Falls LHP Mitchell Clegg (2-2) earned the win with six innings of one-run ball. The T-Bones lone run came when 1B Matt Padgett drove in RF Kennard Jones in the third with an RBI single.

Runs were hard to come by in Tuesday’s game between Grand Prairie and Wichita, but excellent pitching down the stretch helped the AirHogs hold on for a 2-1 win. The AirHogs took the lead in the bottom of the fifth when RF Kenny Held scored on a groundout, and Grand Prairie did not allow a Wichita hit for the rest of the game. Winning pitcher Josh Strawn (6-1), relief pitcher Justin Dowdy and closer Patrick Mincey combined for the hitless final four innings. Strawn pitched seven innings, allowing one run on six hits while striking out five.

The AirHogs brought their other run across in the first inning, when LF Brian Myrow singled in a run. Wichita’s only run of the game came in the third on LF Jared McDonald’s solo home run.

When the RedHawks and Saltdogs finished seven innings tied at two, Tuesday night’s game looked like it might head to extra innings, but Fargo-Moorhead exploded for nine runs in the game’s final two innings to win, 11-2. RedHawks’ 2B C.J. Retherford drove in the go-ahead runs in the eighth inning with a two-run blast to make the score 4-2. Fargo-Moorhead was far from done though, bringing 13 batters to the plate during a seven-run top of the ninth. Retherford again made his presence felt, driving in two runs with an RBI double and finished with a team-high four RBI.

Tied at two in the top of the eight, Laredo batted around the lineup, putting up six runs to pull away for a 9-4 win.

Behind in the count 0-2, 1B Mike Sheridan battled back to draw a walk, kicking off the rally. CF Harrison Kain then doubled, moving Sheridan to third and SS Jimmy Mojica brought him home for the go-ahead run. DH John Alonso then scored two more with a double. Alonso batted 3-for-6 with four RBI and two runs scored. Four Lemurs had multi-hit games.

Lemurs’ southpaw Fabian Williamson (4-1) earned the win after throwing seven innings of two-run ball. He allowed six hits and two walks but struck out a season-high 11.

The game between the Gary SouthShore RailCats and the Sioux City Explorers has been postponed due to rain. The game will be made up as part of a doubleheader tomorrow beginning at 5:05 p.m.