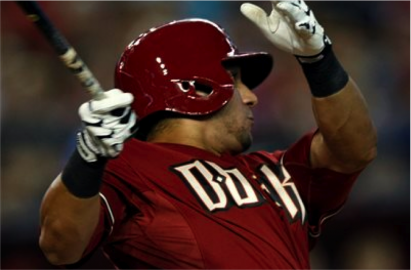 Two shoulder surgeries ended young David Peralta‘s career as a pitcher, but from those cuts has emerged one of the season’s most intriguing storylines. He moved to the outfield three years ago, and it’s safe to say the conversion took.

After spending three seasons torching the independent leagues, Peralta signed with the Diamondbacks in July 2013. Eleven months and two promotions later, the 26-year-old set a franchise record with 40 hits in his first 32 major league games.

“When you work hard and you do the right things, good things can happen,” Peralta said. “I’m just happy I am doing well right now. I’m glad I’m helping the team to win, too. I’m still living my dream.”

Peralta signed with the Cardinals as a 17-year-old lefthander out of Venezuela in 2004. He went 5-8, 4.51 over three seasons in Rookie ball before arm injuries sidelined him from 2008-10.

Peralta moved to the outfield in the Venezuelan League following the 2010 season, then hit .359/.404/.566 over 898 at-bats in independent ball – primarily the American Association – from 2011-13. That’s when Diamondbacks scout Chris Carminucci discovered the developing lefthanded hitter.