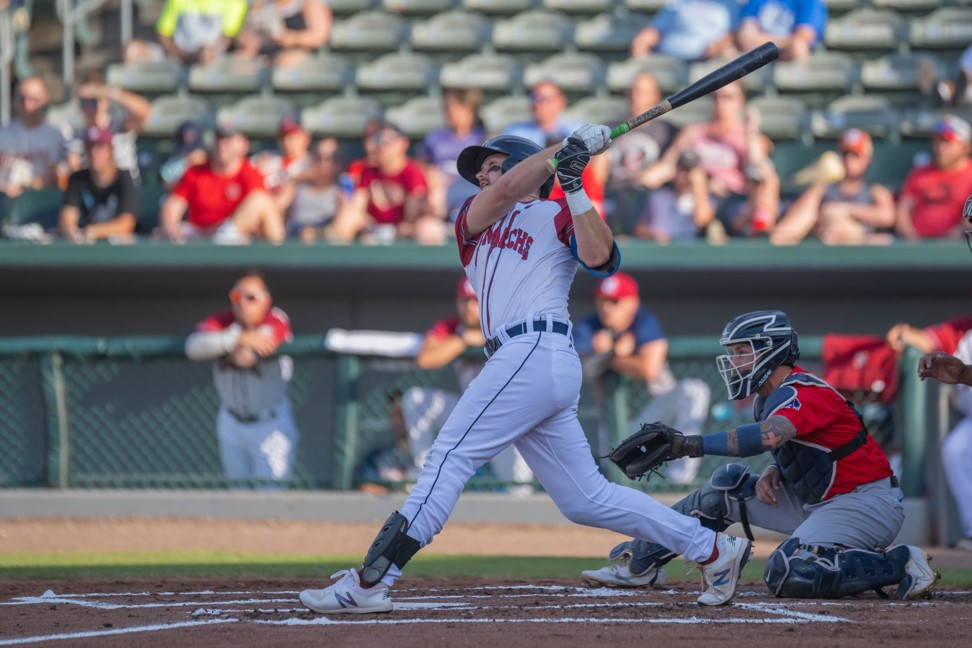 The Gary SouthShore RailCats coupled a brilliant performance from starting pitcher Chris Erwin along with a middle-inning offensive surge to cap off a 6-0 shutout of the Milwaukee Milkmen.

In his first start following his 27th birthday last Wednesday, the left-hander tossed seven innings of no-run baseball, allowing five hits while striking out seven as he outdueled former Major Leaguer A.J. Schugel en route to his third win of the season.

Early on, the Milkmen applied pressure to the RailCats defense by placing two runners in scoring position through a hit-by-pitch and double in the top of the first.  However, Erwin kept his cool on the mound as he fanned two consecutive batters to keep Milwaukee off the board.

The Milkmen put together a pair of one-out hits in another attempt to plate the game’s first run, but once again, Erwin remained unfazed.  A strikeout and flyout to the next two batters stranded another pair of Milwaukee baserunners and kept the score deadlocked at zero.

Gary SouthShore’s bats rewarded Erwin’s resilience by forcing the Milkmen infield into a pair of errors as they took the lead in the bottom of the fifth.  Jesus Marriaga led off by reaching on an error and advanced to third on a Victor Nova single.  The next batter, LG Castillo, snuck a ground ball under Logan Trowbridge’s glove at third base, enabling Marriaga to score and putting the ‘Cats ahead 1-0.

Marriaga returned to the plate the very next inning to double the RailCats advantage.  As Michael Woodworth stood on first base with two outs after his single, Marriaga roped a double into the right-center field gap to bring him home, giving Gary SouthShore a two-run edge.

Not to be outdone, the RailCats erupted for four runs in the bottom of the seventh.  Sam Abbott tripled, and Jackson Smith got hit by a pitch to set runners on the corners before Nate Scantlin came through by driving Abbott in on a line drive single.  The Milkmen turned to their bullpen to face Tom Walraven, and he immediately made them pay for that decision.  He crushed a three-run home run, his second in as many games, to provide the ‘Cats a comfortable 6-0 cushion heading into the final two innings.

Needing just six outs to lock down the win, manager Lamarr Rogers took no chances as he turned to Julio Vivas and Yeison Medina.  The two relievers each tossed scoreless innings in the eighth and ninth, wrapping up a dominant win.

Returning from a quick three-game road trip, the Fargo-Moorhead RedHawks returned to the friendly confines of Newman Outdoor Field on Friday, to open a seven-game homestand and the first of three against the Chicago Dogs. Both teams are in first place in their respective divisions with the RedHawks coming off two wins and a loss in Lincoln. The ‘Hawks have a two-game lead in the West over Kansas City, while Chicago, who’s in the midst of a six-game losing streak, is trying to hold on to a four and a half game lead over Kane County in the East Division.

Left-hander Kevin McGovern made his 17th appearance for the RedHawks against Chicago’s Jordan Kipper, with both pitchers looking for their eighth win of the season. But was the offense that would start the game as the Dogs would get the first run in the top of the first, when second baseman Grant Kay hit a bases loaded, two-out single that would score Charlie Tilson and give Chicago an early 1-0 lead.

The RedHawks would tie the game in the bottom of the first as third baseman Leo Pinã hit his 50th RBI of the season as a single to left would score Peter Maris. Maris would add to the home team’s lead in the bottom of the fourth as he would bring in Nick Novak on a two-out single and give the RedHawks a 2-1 advantage. The RedHawks’ lead would go to three as Maris, the reigning AAPB Batter of the Week (August 1-7), hit his second RBI of the game that would score Novak again and giving the RedHawks a 4-1 lead.

Kipper came out in the bottom of the sixth with what appeared to be some discomfort in his right leg after walking Sam Dexter on four pitches. He would get the loss and go to a record of 7-5 as he pitched 5.0 innings, allowing three runs on nine hits with seven strikeouts and two walks.

McGovern would dominate after giving up the first-inning run, holding the Dogs scoreless through six innings as he struck out nine batters. However, McGovern would give up another run in the top of the seventh as a two-out wild pickoff throw to first would score Anfernee Grier, cutting the lead to 4-2. McGovern would come out after the 7th inning, giving up two earned runs on seven hits with nine strikeouts and no walks as was the winning pitcher as he goes to eight wins and three losses on the year. After tonight’s win, McGovern continues to lead the American Association with 116 strikeouts.

The RedHawks would turn to Joe Jones in the eighth inning as he struck out two and walked two before handing the ball off to Alex DuBord in the ninth. DuBord allowed one hit and struck out two and picked up his league-leading 21st save of the year as the RedHawks pitching staff leads the AAPB in ERA (4.38), wins-losses (49-28) saves (24) and has the lowest earned runs (329) in 2022.

Trailing 4-3 in the bottom of the eighth inning, Max Murphy ripped a single to left-centre with one out.  David Washington was next and crushed a two-run home run to left-centre field that gave the Goldeyes their first lead of the night.  It was Washington’s second home run of the game.

Tasker Strobel struck out two during a perfect top of the ninth to earn his 20th save of the season.  Strobel becomes just the fifth pitcher in franchise history to reach the 20-save mark.

The Explorers took a 3-0 lead in the top of the second.  Ademar Rifaela hit a solo home run down the right field line with one out.  After Zack Kone singled, Jack Kelly hit a two-run home run to right-centre.

In the bottom of the third, Eric Rivera drew a one-out walk, stole second, and scored from second an infield single from Ian Sagdal.

The Goldeyes closed within 3-2 in the bottom of the fourth when Washington led off with a home run to left.

Sioux City (36-42) re-extended the lead to 4-2 in the top of the fifth when Blake Tiberi led off with a single and scored on a Trey Martin double that resulted in an error.

Will McAffer (1-0) picked up the win after pitching a scoreless top of the eighth.

Solomon Bates (0-1) took the loss for the Explorers.

The Kansas City Monarchs (48-31) bounced back with a 14-10 win over the Lincoln Saltdogs (37-43). The Monarchs look for a series win against Lincoln tomorrow for the first one since the last series in July against the Sioux Falls Canaries.

Kansas City struck first as Jacob Robson was walked before David Thompson launched a ball to center field for a 2-0 lead in the bottom of the first.

The Saltdogs responded in the top of the second as Wellington Dotel singled to right and Hunter Clanin got hit by a pitch. Skyler Weber then sent one straight back center field, scoring Dotel. Randy Norris snuck one down the third base side line for a double, tying the game at 2-2.

Lincoln took the lead at 3-2 in the third as Rayder Ascanio singled to right field and eventually reached third by a pass ball. A sacrifice fly from Josh Altmann then brought in Ascanio.

Matt Adams launched a towering rocket to the home run hill almost hitting the top of the clubhouse for a two-run home run, bringing in Thompson who had singled, making the score 4-3 going into the fourth.

Casey Gillaspie doubled to right field before Ryan Grotjohn did the same. Kevin Santa then sent a sac fly to center field, allowing Grotjohn run in from third, digging into the Saltdogs lead 7-6 going into the fifth.

The bottom of the fifth proved a big one for the Monarchs with Sweeney being hit by a pitch and J.C. Escarra and Gillaspie both getting walked. Grotjohn doubled to right for two RBI before Kevin Santa singled to center allowing Kansas City to take the lead at 10-8.

Robson slid into home after being walked to first and advancing to second on a wild pitch. He reached third on a fly out and Adams singled to center, adding to their lead 11-8.

The Monarchs kept the runs coming in the seventh as the bases were loaded again. Gillaspie got walked, Grotjohn singled to center and Santa bunted before Thompson singled to left field for two RBI, extending the lead to 13-8 going into the eighth.

Gillaspie sent the only solo home run for the Monarchs to deep center field in the bottom of the eighth, growing the lead to14-8.

The Saltdogs didn’t go quietly though as Dotel singled to left field before Clanin launched a home run to the patio in left, but it wasn’t enough as they still trailed 14-10.

Lake Country got on the board in the first inning with a two-run homerun from TJ Bennett but Tyler Garkow rebounded to toss six strong innings, shutting out the DockHounds the rest of the way. Sioux Falls cut the lead in half with a Gavin LaValley RBI single in the fifth inning and Nick Gotta drew a bases-loaded walk in the sixth to tie the game.

It was only a matter of time before Wyatt Mathisen made his presence known. The former Arizona Diamondbacks’ three-run bomb in the sixth inning of Saturday night’s contest between the Railroaders and the Kane County Cougars propelled the home team towards their second consecutive victory in a 6-4 final.

Although Cleburne ended up coming away with the win in the end, it was Kane County who got on the board first. Railroaders’ starter Kody Bullard struggled early on, allowing one run in the first and two more in the second. After two complete innings, it was 3-0 Kane County.

The Cougars put their final run of the contest up in the top of the fourth after Cornelius Randolph singled home Ernie De La Trinidad to make it 4-0.

It was all Railroaders after that, however. In the bottom of the fourth, Kacy Clemens launched his sixth home run of the season deep into the Cleburne night to cut the Cougars’ lead in half.

Cleburne took their first advantage of the game in the bottom of the sixth off of Mathisen’s three-run bomb. The home run was Mathisen’s second hit as a Railroader at the time, both of which were long balls.

The final tally in the run column was in the bottom of the seventh. With the bases loaded and two outs, Mathisen laid down a fantastic bunt that Cougars’ third basemen Dylan Busby was unable to field cleanly, allowing Chase Simpson to scamper home to make it 6-4.

The Railroaders were cruising toward their second straight win once the game was turned over to the bullpen after Bullard went five innings. Brendan Bell was fantastic in his inning of relief. He was followed by Jordan Foley who pitched a scoreless seventh inning. Kevin McCarthy came on in the eighth and worked a clean frame. Manager Logan Watkins then handed the ball to Nick Gardewine in the ninth. The former Ranger pitched a one-two-three final frame to shut the door on the Cougars and to deliver the Railroaders another victory.

Bell picked up his first victory of the season out of relief. Jose Fuentes got the loss for Kane County moving his record to 5-3.