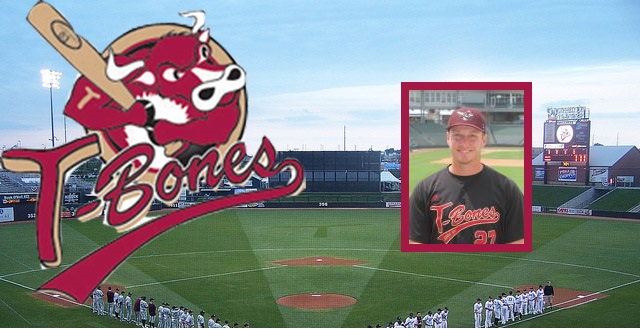 The Kansas City T-Bones put up five runs in the bottom of the first inning and never looked back as they took the first game of their Saturday doubleheader with the St. Paul Saints 9-4.

Seven different T-Bones registered hits in the ball game including 3B T.J. Mittelstaedt who went 2-for-3 with three RBI and two runs scored. Both RF Ray Sadler and C Christopher Bianchi also had two-hit games for Kansas City. For the Saints, LF Joe Bonfe had a team-high three hits and both 2B Jake Taylor and DH Willie Cabrera went 2-for-4.

Reliever Patrick Mincey earned the win as he worked the fifth inning and Derek Loera picked up a six-out save.

The Kansas City T-Bones completed the sweep of their Saturday twinbill by walking off on the St. Paul Saints with a three-run home run from 2B T.J. Mittelstaedt. That blast gave the T-Bones a 5-2 win in the seven-inning affair.

The Saints took the early lead as they put up one run in the first and second innings but the T-Bones tied the score with two runs in the third. The score remained tied until Mittelstaedt’s blast in the bottom of the seventh. Mittelstaedt went 2-for-4 in the game giving him four hits on the day and a total of six RBI. 1B Matt Padgett and CF Robby Kuzdale each had two hits for the T-Bones.

For the Saints, 3B Devin Thaut and SS Joey Becker each had two hits on the night.

The Winnipeg Goldeyes held the RailCats scoreless for the first seven innings as they built up their lead and eventually claimed a 4-1 win over Gary SouthShore.

Winnipeg scored two runs in the second inning on a two-run home run from RF Josh Mazzola and then added another two runs in the fifth inning as 2B Brock Bond scored on a sacrifice fly from SS Tyler Kuhn and 3B Jake Blackwood scored on a single from 1B Casey Hearther. The RailCats’ only run came in the top of the eighth when CF Drew Muren singled home C Ryan Babineau.

Winnipeg starter Ethan Hollingsworth was tabbed as the winner as he went seven strong innings and allowed the one run on five hits and had five strikeouts.

Salerno posted game-highs in hits, RBI and runs for the RedHawks and was one of three RedHawks to have a multi-hit game. Both C Travis Higgs and 1B Michael Thompson each went had two hits on the night and Higgs added an RBI and two runs scored. For the Canaries, 3B Carlos Mendez was the only batter to have more than one hit as he went 2-for-3 with a run scored.

On the bump, starting pitcher Brian Ernst earned the win as he went 6.1 innings and allowed one earned run on six hits.

A seven-run sixth inning boosted the Wichita Wingnuts to a 10-3 win over the Laredo Lemurs on Satuday night.

Nine different Wingnut batters had at least one hit in the game and five of them had more than one. C Chris McMurray ended up with a team-high three RBI as he had a three-run home run to kick start the sixth-inning rally. SS Ryan Khoury, DH Brent Clevlen, 2B/3B Abel Nieves, CF Carlo Testa and 3B Chris McClendon were the five batter to have more than one hit as each of them had two in the game.

For the Lemurs, seven batters had hits in the game and they were led by 3B John Alonso who went 2-for-5 with an RBI.

The Amarillo Sox held the Grand Prairie to just one run of five hits as they claimed a 6-1 win on Saturday night.

Sox 3B Travis Weaver went 4-for-4 with an RBI and three runs scored and both 2B Geraldo Valentin and CF Jason Martin added three hits apiece. Martin had a team-high three RBI.  For the AirHogs, CF Eric Baker had a team-high two hits and RF Ryde Rodriguez had the team’s lone RBI.

On the mound it was starting pitcher Matt Larkins that picked up the win for the Sox. Larkins worked seven innings and allowed the one run on three hits while registering three strikeouts.

Fans can watch American Association and Can-Am League games live and for free onwww.independentprofessionalbaseball.com from InnovaTV.