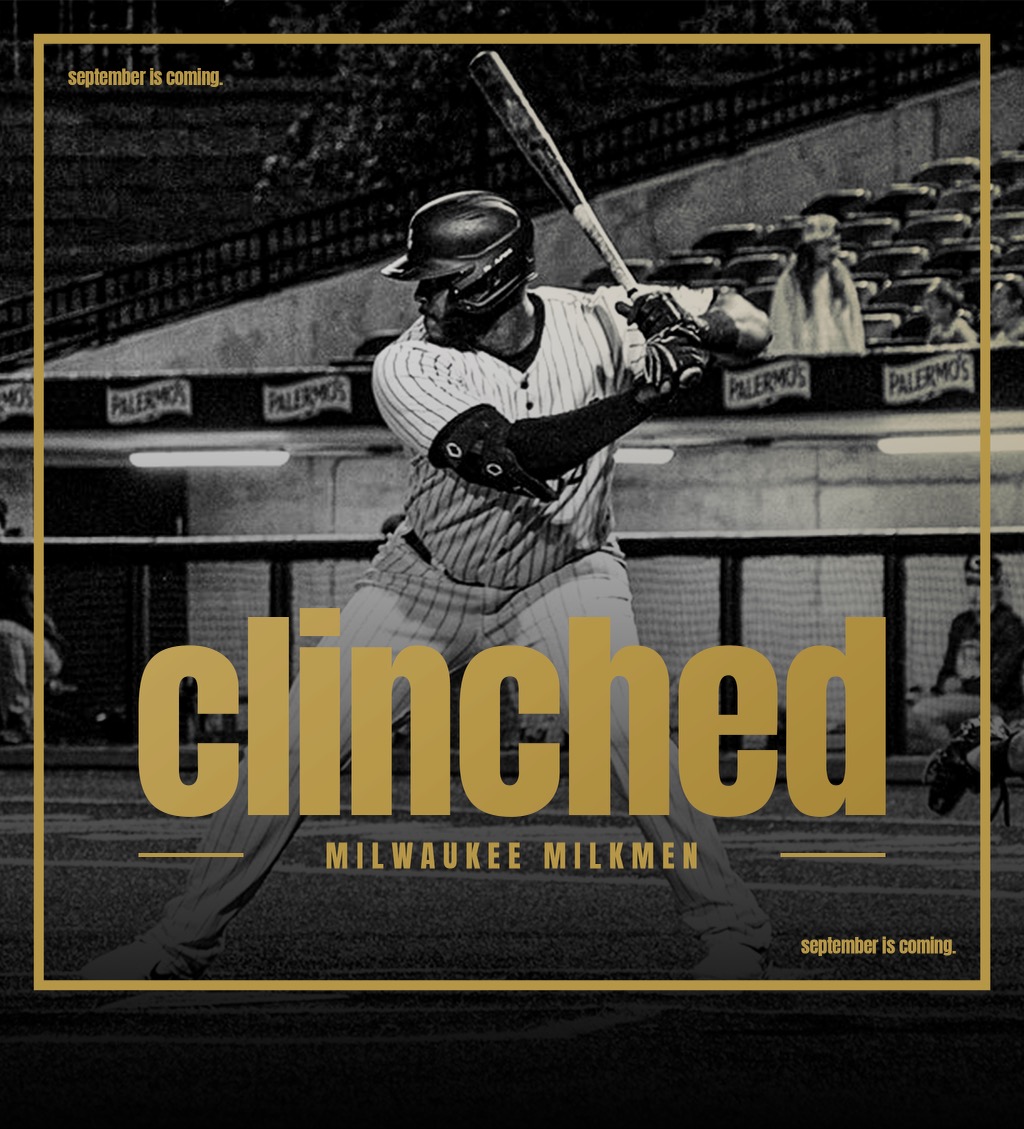 The Milwaukee Milkmen (49-42) clinched a playoff berth in walk-off fashion against the Kane County Cougars (47-44).

Hector Sanchez stole the show for the Milkmen starting with an RBI single in the bottom of the 2nd inning.

Both teams had to wait a few more innings for more runs as the first run after that was scored in the top of the 6th inning on an error that brought in Sherman Johnson for the Cougars. A Nick Franklin double led to one additional run being scored by the Cougars in the 6th.

Keon Barnum answered the call in the bottom of the 7th with a 2-RBI double which was soon followed by a Cougars RBI single from Alexis Pantoja in the top of the 8th.

The game went into extra innings and with two men on in the bottom of the 10th inning Sanchez cranked a 3-run bomb to secure the win and clinch a playoff spot for the Milkmen.

The Gary SouthShore RailCats took their power swings with them to Impact Field as they slugged four home runs to take down the Chicago Dogs 5-2.

Though the Dogs outhit the RailCats 10-7, five Gary SouthShore arms combined to strand 10 runners on base to keep Chicago from doing any significant damage.

In their first turn at bat, the Dogs took advantage of timely hitting to take an early lead.  A pair of singles placed runners on the corners, and a sacrifice fly allowed Chicago to draw first blood.

However, their lead did not last long.  Sam Abbott proceeded to blast a two-out, two-run home run to pull the ‘Cats ahead 2-1.

Down by a run, the Dogs did not waste any time getting back into the ballgame, and they tied up the score in the bottom of the third.  A two-out single tied the score, but with two runners in scoring position, RailCats starter Adam Heidenfelder refused to back down.  He induced a groundout to keep Gary SouthShore on equal footing.

Just a few moments later, Abbott struck again.  A two-out solo home run in the top of the fourth gave the RailCats their advantage back as they went up 3-2.

The long ball, Abbott’s 18th of the season, moves him within one of tying Cristian Guerrero‘s single-season franchise record which has stood since 2010, Gary SouthShore’s Northern League campaign.

Chicago immediately threatened in the bottom half of the frame as each of their first three batters worked their way aboard.  But, Jackson Smith caught a runner stealing second base, and Heidenfelder coaxed a flyout and a strikeout from the top two hitters in the Dogs order to keep the ‘Cats in front by one.

The Dogs turned to their bullpen with two outs in the top of the sixth, but Victor Nova quickly made that decision look foolish.  He greeted reliever Shane Barringer to the ballgame by immediately taking him deep, increasing Gary SouthShore’s edge to two.

Trailing by a pair, once again, Chicago managed a pair of base runners to move the go-ahead run into the batter’s box.  This time, Joel Huertas emerged from the bullpen to quench any momentum, and he retired the next two batters to hold the lead at two.

Aaron Phillips proceeded to navigate around a one-out single to pitch a scoreless single, and Reyson Santos prevented a leadoff double to score to take the RailCats into the ninth on top by two.  As Chicago made another pitching change to begin the frame, Jesus Marriaga supplied the Dogs with a dose of instant regret. A leadoff home run off All-Star reliever James Reeves added another tally to Gary SouthShore’s total, and they held a three-run cushion just three outs away from a victory.

Manager Lamarr Rogers turned to Jack Eisenbarger to slam the door, and he pitched a perfect inning thanks to a pair of clutch defensive plays.  Abbott pounced on a drag bunt attempt to keep the leadoff man off base, and Lester Madden ended the contest with a beautiful leaping catch in left field, securing Gary SouthShore’s win.

The Lake Country DockHounds took game one of the series on an eleventh inning walk off two run homer, downing the Explorers 6-4.

Sioux City grabbed the lead first in the third inning. Miguel Sierra led off with a single, scored when Blake Tiberi singled to left, and the ball got by the Lake Country left fielder allowing Sierra to score on the error from first and take a 1-0 lead.

Lake Country immediately responded in the following frame. A two out pop up by Tristan Carranza was lost in the lights which allowed Jake Snider to score from second after his lead off walk and it tied the game 1-1.

In the sixth Lake Country took the lead 2-1 on a two out error by Sioux City but the X’s immediately responded in the top of the seventh. Dylan Kelly doubled to lead off the inning, advanced to second on a single and scored on a double play to tie the game 2-2.

Both starters received a no decision. Matt Pobereyko struck out nine while allowing a run in five innings of work. Angel Ventura allowed two runs, one earned in his seven innings of work.

Both teams threatened multiple times throughout the late innings to take the lead but neither one scored. For the Explorers a large reason why they were able to keep Lake Country from scoring was by racking up the strikeouts. The Explorers struck out a season high 19 batters in the ballgame.

In the tenth, Sioux City took the lead on a Trey Martin double, going ahead 3-2. But Lake Country responded immediately, when Lamar Briggs scored from third on a pass ball to send it to the eleventh.

In the eleventh, Gabe Snyder advanced to third on a sacrifice bunt and scored on a sacrifice fly to give Sioux City a 4-3 lead. In the bottom half of the frame after a failed sacrifice bunt attempt TJ Bennett singled to left tying the game at four. With two outs and Bennett at third Tristan Carranza homered to left to walk it off for Lake Country and give the DockHounds the win.

Tyler Schmipf (2-1) got the win by tossing two innings of relief, Thomas McIlraith (5-4) was handed the loss for Sioux City.

John Bezdicek allowed two runs over a career-best seven innings, but the ‘Dogs fell 2-1 in the opener against the Cleburne Railroaders at Haymarket Park on Friday night.

Bezdicek allowed two runs on six hits with three walks and four strikeouts, but the ‘Dogs (41-50) left two runners on base in each of the final two innings and lost for a third consecutive game.

Cleburne (43-48) opened the scoring on a solo homer from Kacy Clemens in the 2nd inning. Clemens later added a run in the 4th on a sacrifice fly.

Lincoln got on the board in the 8th inning when Luke Roskam hit a leadoff homer. After walks to Randy Norris and Justin Byrd, Rayder Ascanio tried a sacrifice bunt that resulted in an out at third base. Ryan Long then grounded out and Jason Rogers struck out to end the inning.

The ‘Dogs then got a leadoff single from Josh Altmann in the 9th. Welington Dotel’s groundout moved him to second before a strikeout from Hunter Clanin. Roskam then worked a walk to extend the rally, but Norris struck out to end the game.

Cleburne’s Garett Alexander allowed one run over seven-plus innings, while Nick Gardewine picked up his 15th save of the season.

The ‘Dogs used just one reliever – R.J. Fruere who went two innings and retired six of the seven batters he faced.

The Monarchs took the lead in the top of the third inning off “birds” starter Colby Wyatt (4-4) with a walk by Dylan Harris and a drag bunt single from Mallex Smith. Kevin Santa would show bunt on the first pitch that was low for a ball then foul the second offering to even the count at 1-1. He then roped a double down the right field line to score Harris, giving the Monarchs the lead.

Darnell Sweeney would score Smith on a fielder’s choice to make it 2-0. With two outs, Jan Hernandez then hit an infield single to score Santa to give “kay-see” the 3-0 advantage.

Jabari Henry drove in a run off Belzer with a single in the bottom of the third to cut the lead to 3-1. The Monarchs came right back with a solo home run from J.C. Escarra in the top of the fourth to lead off the inning. It was his 11th of the year.

Kona Quiggle got the Canaries on the board in the home half of the fourth to make it a 4-2 lead for the Monarchs on an RBI single. Sioux Falls would grab another run on a solo home run from Henry in the fifth to make it a one-run game at 4-3. It was Henry’s 27th long ball of the year.

In the top of the sixth the Monarchs picked up and unearned run to make it 5-3 in favor of Kansas City. Casey Gillaspie would single off Cesilio Pimentel and score with two outs on a single to right from Harris that was misplayed for an error in right by Connor Blair.

Belzer would work a 1-2-3 sixth inning, including finishing the inning by teaming up with Casey Gillaspie on a on three-to-one put out at first base. It was the third consecutive quality start for Belzer who finished with a line of 6IP, 3H, 3R, 3ER, 3BB, 5SO in the win. The Monarchs got a scoreless stanza from Jeremey  Rhoades out of the pen in the seventh.

In the eighth inning Gillaspie would work a one-out walk off Pimentel to get aboard for J.C. Escarra. The Florida native launched a two-run blast into the teeth of the south wind for his second home run of the night and his 12th of the season to make it 7-3.

In the bottom of the ninth, Wyatt Ulrich would hit an inside-the-park home run off Jameson McGrane to make it a 7-4 score. McGrane then would punch out Henry to end the game and give the Monarchs their third straight win and open the six-game road trip with a W.

This game was postponed due to rain and will be played on Saturday, August 27 at 5:00pm