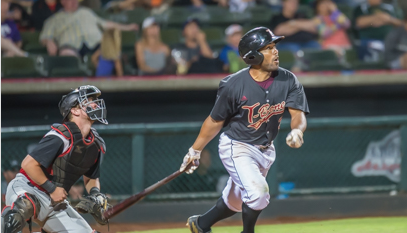 DURHAM, NC- The official statistician of the American Association, Pointstreak, has announced that Kansas City T-Bones INF Marcus Lemon (pictured) has been named this week’s Pointstreak Player of the Week for the week ending July 2.

Lemon hit .538 (14-for-26) this week, as he hit safely in all six games. He notched two doubles, two home runs and three RBI in the process.

The Umatilla, FL native began his week Tuesday at the Lincoln Saltdogs, going 2-for-4 with a run scored in a 6-5 defeat. He came back Wednesday to record three hits, adding in a double, an RBI, and two runs scored in a 12-4 win. Lemon put the finishing touches on his impressive series with a 2-for-5 game on Thursday, hitting a solo home run in a 4-3 Kansas City triumph.

The T-Bones remained on the road into the weekend, visiting the Sioux City Explorers and completing a series sweep. He was 1-for-3 with two walks and run scored in Friday’s 10-8 win, and was 3-for-4 with a solo homer on Saturday in a 6-2 triumph. Lemon picked up one last three-hit game on Sunday, a 3-for-5 game that featured a double and a run scored in a 6-4 win.

He is now hitting .323 in 40 games, with 10 doubles, four home runs, and 20 RBI. 2017 marks Lemon’s first season in Independent Baseball after a lengthy career in affiliated ball. Originally a fourth round draft pick of the Texas Rangers in 2006, Lemon spent 11 seasons between the Rangers, Atlanta Braves, Detroit Tigers and Chicago White Sox systems, reaching as high as Class AAA. He appeared in 21 games with the Class AAA Toledo (Ohio) Mud Hens in 2014, and 17 more AAA games with the Charlotte (N.C.) Knights in 2016.

Kansas City opens a home series against the Sioux Falls Canaries tonight at 7:05 p.m. Central time. The series can be seen live and for free at www.americanassociationbaseball.tv.