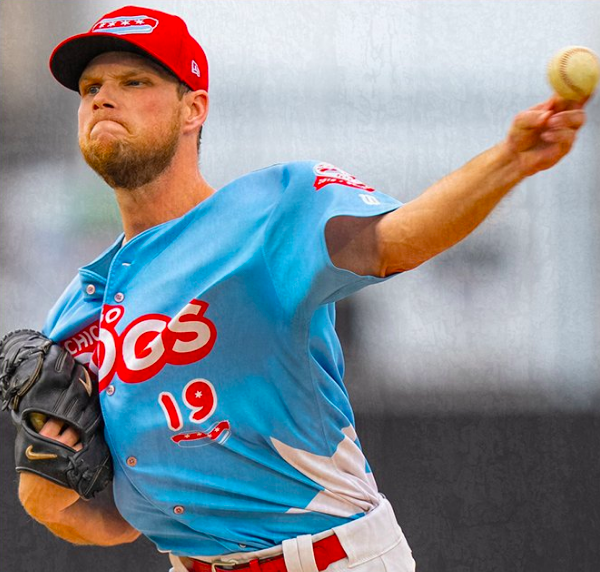 DH Ademar Rifaela was the hero for the Sioux City Explorers (35-41) Wednesday night. He hit a towering three-run walkoff home run to win the game 5-2 and take the series over the Kansas City Monarchs (47-30).

Both teams were scoreless through the first five innings. This was in part due to strong starting pitching from both teams. Nick Belzer started on the mound for Kansas CIty. He threw six scoreless innings while striking out seven. Patrick Ledet started for the Explorers. He threw seven innings allowing just one run.

The Monarchs scored a pair of runs in the sixth inning when LF Jacob Robson hit an RBI-triple to center and 3B David Thompson hit an RBI single to right.

The Explorers responded the next inning as C Jack Kelly scored due to an error made by second baseman Darnell Sweeney. After seven innings of baseball, Kansas City led 2-1 over Sioux City.

Jameson McGrane took the mound for the Monarchs in the bottom of the ninth. RF Danny Amaral hit a one-out single to right field. After this at-bat, 3B Blake Tiberi reached first on a hit by pitch with two strikes. 1B ​​Danry Vasquez hit an RBI-single to left field to tie the game 2-2. Ademar Rifaela stepped up to the plate with two outs and two runners on. He launched a 3-run bomb over the right field wall to win the game in walkoff fashion as the Explorers won 5-2.

The Saltdogs took an early lead in the third inning as CF Hunter Clanin led off with a solo home run. RBIs from 1B Jason Rogers and 2B Josh Altmann gave Lincoln a 3-0 lead after three complete innings.

The Saltdogs tacked on one more run in the fifth inning when 3B Ryan Long roped a double to score LF Justin Byrd and make it a 4-0 ballgame.

Fargo-Moorhead finally got on the scoreboard in the sixth inning on RBI singles from 2B Peter Maris and 3B Leobaldo Pina. 1B Manuel Boscan was able to score on a wild pitch from Greg Minier to cut their deficit to one run.

Lincoln scored an insurance run in the bottom of the sixth inning on an RBI-single from RF Welington Dotel.

Greg Minier earned a win and quality start for the Saltdogs. He allowed two earned runs through six innings of work.

Jeff Kinley had a historic performance on the mound Wednesday night at Impact Field.

He made American Association history, as the starting pitcher for the Chicago Dogs (46-30) tied the league record with 17 strikeouts in a single game.

Although Kinley had an incredible start on the mound, it was not enough as the Dogs fell to the Gary SouthShore RailCats (33-44) 4-1.

Chicago scored their only run in the bottom of the fifth due to a throwing error made by 2B Michael Woodworth. The error that allowed 1B K.C. Hobson to score and put the Dogs up 1-0. Neither team scored the next three innings, and after eight innings of baseball Chicago still led 1-0.

Although the RailCats were scoreless through eight innings, the offense woke up when it needed to most as they scored four runs in the top of the ninth. 1B Sherman Graves notched a double to bring in Woodworth and tie the game 1-1. A few batters later, 3B Victor Nova belted a three-run bomb to right-center to put the RailCats up 4-1.

Yeison Medina took the mound for Gary SouthShore in the bottom of the ninth. He retired three straight hitters as the RailCats stunned the Chicago Dogs, who were on the verge of a historic 1-0 win.

The Winnipeg Goldeyes (45-32) beat the Milwaukee Milkmen 13-1 at Shaw Park on Wednesday night.

The Goldeyes jumped out to a 3-0 lead in the bottom of the first inning.  Eric Rivera and Ian Sagdal started the frame with back-to-back singles.  Two batters later, Max Murphy reached on an infield single that scored Rivera.  A throwing error on Murphy’s single moved runners to second and third, and the Goldeyes made it 3-0 when David Washington ripped a single through the right side.

Winnipeg broke the game open with a six-run bottom of the fourth.  With one out, Kevin Lachance and Deon Stafford Jr. hit back-to-back singles.  Hidekel Gonzalez followed with a two-run double into the left field corner.  After Rivera singled through the left side, Sagdal hit an RBI double down the right field line that made it 6-0 and chased out Milkmen starter AJ Jones.  Facing new reliever Juan Echevarria, Raul Navarro smacked a two-run double to centre field.  Two batters later, Washington lined a single down the left field line that scored Navarro with the Goldeyes’ ninth run.

Milwaukee (40-37) scored its lone run in the top of the sixth on a two-out, RBI single from Jeremiah Burks.

Goldeyes’ starting pitcher Landen Bourassa (4-4) picked up the win, allowing one earned run on eight hits over seven innings.  Bourassa walked two, struck out none, and recorded 14 of his 21 outs on groundballs.

The Goldeyes tacked on four more runs in the bottom of the eighth.  With the bases loaded and one out, Sagdal drove home Lachance with an RBI single.  Navarro followed with a two-run double into the right field corner, while Murphy singled to right to chase home Sagdal.

The Goldeyes finished with 18 hits, which tied a season-high.  Will McAffer and Zac Ryan each pitched a scoreless inning in relief of Bourassa.  Rivera made a diving and sliding catch in right-centre to rob Carl Chester of an extra-base hit in the top of the eighth.  All nine Goldeyes’ starters had at least one hit, including four by Sagdal.

Jones (5-4) took the loss, allowing eight earned runs on 11 hits in three and one-third innings.  Jones walked none and struck out none.

Everything went the Cougar’s way on Wednesday evening. Cleburne was no match for what Kane County was able to do offensively, as the Railroaders’ pitching staff had no answers throughout the night. The Cougars racked up 15 hits in their 13-5 victory over the Railroaders from The Depot at Cleburne Station.

It was clear right from the start that Kane County was going to be in the driver’s seat the entire way. They put up four runs in the top of the first off Railroaders’ starter Michael Wong who was hit hard throughout the entirety of his outing.

Cleburne put up their first run of the night in the bottom of the second when Chase Simpson lifted a ball over the right field fence to bring the score to 4-1.

Kane County countered with more runs in the fourth, a trend they continued throughout the game. Two runs came around the score in the inning and the Cougars had themselves a five-run cushion.

That lead was given a bit more breathing room in the top of the fifth when they added three more to the total to make it 9-1 at the halfway mark.

The Railroaders pushed their second run across in the bottom half of that same frame off an Edwin Arroyo RBI single that brought Jacob Bockelie around to score.

In the sixth was where Cleburne attempted to make a push at a potential comeback. Simpson launched his second home run of the night, this one a two-run shot, to make it 9-4. That home run brought Simpson’s season total to 22, a single-season high for a Railroader. Wyatt Mathisen then stepped up and hit a ball over the scoreboard, his first hit as a Railroader to make it 9-5.

But Kane County wouldn’t let Cleburne come back. In the top of the seventh, the Cougars struck for two more runs and they were up 11-5.

The team from Geneva, Illinois scratched across two more in the top of the ninth off Nick Gardewine. That score of 13-5 held true through the bottom of the ninth as Cleburne fell to the Cougars for the second consecutive game.

Wong was shelled with the loss. He was roughed up over four and a third innings of work, giving up eight runs on ten hits with four walks and just one strikeout.

Westin Muir was good for the Cougars. He went five and a third innings, allowing five runs (four earned) on seven hits with four walks and one strikeout, a performance good enough to earn himself his fourth win of the season.

A mid-game rally solidified the win for the Sioux Falls Canaries (30-44) as they took down the sliding Lake Country DockHounds (25-51) by a final score of 6-5.

The Canaries came out swinging in the 3rd inning with a solo homerun from Kona Quiggle followed by an unearned run being scored by Nick Gotta.

Again in the 5th the Canaries scored a handful of runs, the first coming off of a Jabari Henry RBI single, the second coming from a bases loaded walk, and the last coming from a sacrifice fly from Trey Michalczewski. They would later score one more run in the 6th and this was enough to hang on against a Lake Country team struggling to get the bats moving.

The biggest moment from the Dockhounds was a solo homer from T.J Bennett in the bottom of the 6th. They put up two runs in the bottom of the ninth to bring the score within one, but Mitchell Walters came in for the Canaries to shut down any dreams they had of coming back.