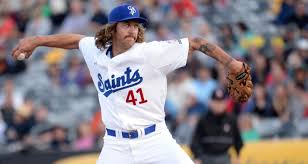 DURHAM, NC- The official statistician of the American Association, Pointstreak, has announced that St. Paul Saints’ RHP Mark Hamburger (pictured) has been named this week’s Pointstreak Pitcher of the Week for the week ending May 29th.

Hamburger currently leads the league in wins (three) and is tied for second in strikeouts (17). The Shoreview, MN native went 2-0 on the week to lead St. Paul into first place in the North Division. On May 24th, he went 7.2 innings in a 5-3 win at Sioux Falls, allowing only three earned runs on six hits. His best outing of the year came on May 29th where he threw a complete game, allowing just one earned run on six hits with six strikeouts in St. Paul’s 4-1 victory over Kansas City.

The Mesabi Range College (MN) product made his Major League debut on August 31, 2011 with the Texas Rangers where he appeared in five games during the season. Hamburger also played in the Minnesota Twins, San Diego Padres and Houston Astros organizations.

Tonight, the Saints will travel to Joplin to take on the Blasters at 6:35 PM from Joe Becker Stadium. Fans can watch select American Association games live and for free at www.americanassociationbaseball.tv.

Previous PostSAINTS, HAMBURGER ROLL PAST T-BONES IN FRONT OF RECORD CROWD OF 10,443Next PostDE LA CRUZ NAMED WEEK 2 PLAYER OF THE WEEK