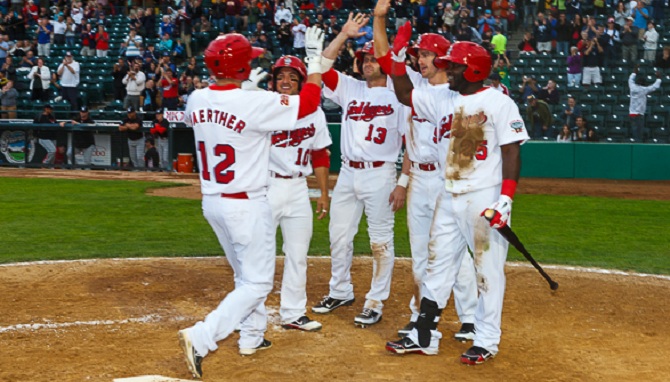 With the bases loaded in the bottom of the ninth inning, Winnipeg Goldeye 1B Casey Haerther (pictured) singled through the right side of the infield to walk off on the Wichita Wingnuts 7-6. Haerther was a tough out at the plate all night as he was 3-for-5 and knocked in an impressive 6 RBI, including a fifth inning grand slam. 2B Amos Ramon was also hot with the bat as he went 4-for-5 and scored three times, including the game-winning run. For the Wingnuts, RF David Amberson had a solid outing going 3-for-3 with a run. 1B C.J. Ziegler was 2-for-4 with a homerun and three RBI.

Four Fargo-Moorhead pitchers combined to shut out the St. Paul Saints as the RedHawks squeezed by 1-0 Monday night. Starter Taylor Stanton was credited with the win after seven innings on the mound. He gave up eight hits and struck out three batters. The bullpen didn’t allow a hit or a walk in the final two innings to hold on to the one-run lead. That one run was provided by a single by DH Tim Alberts in the third inning. CF Nic Jackson, who was 2-for-4 in the game, scored on the play. The St. Paul pitching staff was also solid as they allowed just nine hits in the game. Saints 2B Brad Boyer posted a team-high two hits.

The Lincoln Saltdogs turned on the jets just in time as they turned a one-run deficit into an extra innings 3-1 win over the Sioux Falls Canaries. The Saltdogs trailed by a run going into the ninth inning and CF/RF Stephen Douglas led off the frame with his first double of the game, three batters later he scored on a wild pitch to tie the score. In the tenth, SSYasel Gomez singled and 2B/RF Brad Payne scored on the play as a result of an error.  Gomez scored later in the inning on Douglas’ second double of the game, giving the Saltdogs a 3-1 lead.  Closer R.J. Rodriguez sat the Canaries down in order to earn the save.

The Kansas City T-Bones wasted no time getting on the board on their way to a 6-5 win over the Sioux City Explorers. Kansas City opened up the game with a CF Kennard Jones doubled followed immediately by a homerun by 2B Jairo Perez. Perez finished the night 2-for-3 with a run and a walk. The T-Bones scored again in the fourth and three times in the sixth to stretch out a 6-1 lead before the Explorers mounted a comeback. A run in the eighth put the Explorers down four going to the ninth. C Adrian Martinez led off the bottom of the ninth with a homerun and later in the inning RFPeter Barrows, who was a team-high 3-for-5, singled in a pair of runs but that would be the end of the rally.

The Amarillo Sox topped the El Paso Diablos 8-5 with production from nearly every spot in the batting order. Eight of the nine Sox’s to have an at bat Monday night registered at least one hit and 3B Brandon Jones led the way going 3-for-4 and scoring each time he got on base. 2B Trey Ford, who hit right behind Jones, was 1-for-3 with two RBI and RF Chris Valencia also had a pair of RBI in the game. For the Diablos, 2B Jose Garcia was 2-for-4 and DH Roberto Ramirez was 2-for-3 with a run and an RBI. Starter Jason Mitchell was the winning pitcher for his 7.0 innings of work. He gave up five runs on just six hits and struck out three batters.

Gary SouthShore’s DH Cristian Guerrero’s bases clearing double in the third inning paved the way as the RailCats beat the Quebec Capitales 5-1. The Capitales had scored the first run of the game in the top of the inning but the RailCats quickly loaded up the bases as the first three batters of the inning reached base. Guerrero’s double brought home all three runs and gave Gary SouthShore a lead they wouldn’t relinquish. CF Drew Martinez also had a nice night, going 2-for-4 with a double and a stolen base. For the Capitales, 2B Carlos Willoughby had a strong game going 2-for-3 and scoring a run. Starter Morgan Coombs was tabbed as the winner for his 6.0 innings in which he scattered six hits and allowed just one run.

Photo courtesy of the Winnipeg Goldeyes.