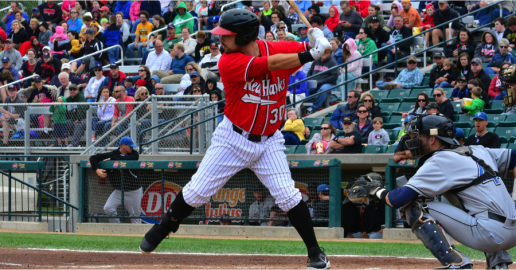 When Erik Castro (pictured) was released by the Houston Astros organization this spring, he was in AAA, only one step from the major leagues. To keep his hopes alive, Castro signed with the Fargo-Moorhead RedHawks. After hitting .319 in 30 games for Fargo-Moorhead, Castro is headed back to affiliated baseball as his contract has been sold to the Atlanta Braves. Castro will report to the Class AA Mississippi Braves in the Southern League. Mississippi will begin a home series with the Montgomery Biscuits on Tuesday evening.

In his 30 games with Fargo-Moorhead, Castro was 38-for-119 with eight doubles, a home run and 14 RBI. He had nine multi-hit games, including two straight to end his RedHawks tenure. On Saturday against the Gary SouthShore RailCats, Castro was 3-for-4 with two RBI in a 5-4 win. A day later, he went 2-for-4. Castro’s home run came as part of a 2-for-4 game against the Wichita Wingnuts on August 4. He also went 4-for-4 with an RBI in a 12-3 win over the Sioux Falls Canaries on July 18.

The former San Diego State University Aztec spent parts of five seasons in the Astros organization after being picked in the 10th round of the 2009 Major League Baseball First-Year Player Draft. He debuted in 2009 with the Short Season Class A Tri-City Valley Cats, hitting .266 in 60 games against New York-Penn League Competition. In 2012, he hit .285 with 27 home runs and 108 RBI for the Class A Lancaster JetHawks in the California League. A year later in 2013, Castro hit .280 with 18 home runs for the AA Corpus Christi Hooks.