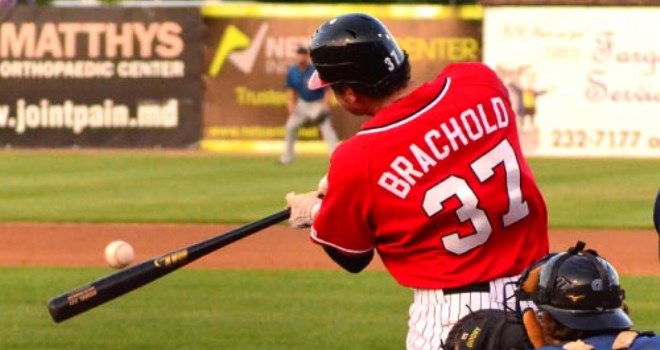 St. Paul seemed primed to coast to victory when it chased the RedHawks’ starter in 1 1/3 innings and held a 5-0 lead in the top of the third, but the RedHawks clawed back with a seven-run bottom of the third to take the game, 7-5.

The RedHawks’ first three batters in the bottom of the third loaded the bases, and 3B Ronnie Bourquin brought home the team’s first run by drawing a walk. CF Nic Jackson and 2B C.J. Retherford followed with back-to-back RBI singles, which cut St. Paul’s lead to 5-3.

And 1B Keith Brachold did the rest.

With the bases loaded and still no outs in the inning, Brachold (pictured) socked a grand slam to give the RedHawks their definitive 7-5 lead.

After starter Paul Burnside struggled through the first 1 1/3 innings, RedHawks reliever Mackenzie King (2-1) hit his stride in long relief, pitching 4 2/3 innings of two-run ball to notch the win. LHP Joe Harris came in during the eighth to record a five-out save.

3B Amos Ramon’s two-RBI double in the eighth sent the Goldeyes home happy, clinching a 6-4 come-from-behind win. The Canaries put men on first and second in the ninth, but Winnipeg closer Patrick Keating escaped with a 6-4-3 double play to lock down his 12th save.

The Canaries scored four runs in the first two innings and led 4-2 up until the seventh, when Goldeyes’ C Luis Alen scored on an error and RF Ray Sadler drove in the tying run with a double, setting the stage for Ramon in the eighth.

Lefty reliever Brendan Lafferty (2-1) struck out two in a scoreless eighth to earn the win. He relieved starter Matthew Rusch, who allowed four runs in seven innings while striking out four.

RailCats’ starter Billy Spottiswood (3-1) deftly worked out of jam after jam, stranding seven runners in his 7 1/3 innings of work to lead Gary SouthShore to a 1-0 win. Spottiswood kept the Explorers scoreless, while striking out two and walking one. The RailCats scored their lone run on DH Cristian Guerrero’s two-out RBI single in the third inning. Guerrero led the Railcats, batting 3-for-4 on the day. Closer Marco Gonzalez entered in the ninth and allowed a single before retiring the side for his sixth save.

Sioux City starter Dan Jurik (1-8) took the tough luck loss after tossing seven innings of one-run ball. Explorers’ SS Leugim Barroso went 2-for-4 with a stolen base in the loss.

The Diablos took an early 2-0 lead against Grand Prairie, but the AirHogs exploded for 10 runs in the third and fourth innings to turn the tide in their favor. Trailing 2-1 midway through the bottom of the third, 1B Andres Rodriguez launched a grand slam to score the go-ahead runs. DH Palmer Karr followed in the next at-bat with another home run to give the AirHogs a 6-2 lead.

But Grand Prairie’s air show still wasn’t over. RF Kenny Held lifted off on a two-run homer in the fourth to extend the AirHogs’ lead. In the same inning, LF Brian Myrow singled in two more runs to give Grand Prairie a comfortable 10-2 lead.

Rodriguez and Myrow led the AirHogs with four RBI each.

Benefitting from plenty of run support, RHP Derek Blacksher (6-5) picked up a win by keeping the Diablos to four earned runs in six innings.

A late surge from the Aigles, led by 1B Brett Flowers’ three RBI in the sixth and seventh innings, thrust Trois-Rivieres past the Saltdogs, 6-2. Lincoln LF Matt Forgatch gave the Saltdogs a 2-0 lead with a two-run blast in the fifth, but the Aigles responded with two runs in the top of the sixth and four more in the seventh.

In the sixth, Flowers doubled to score C Emerson Frostad and two batters later 2B Josh Colafemina drove in Flowers with an RBI single. The following inning, Frostad came to the plate with the bases loaded and connected for a two-RBI double to give the Aigles a 4-2 lead. Flowers stepped to the plate next, and delivered two insurance runs with a single.

The T-Bones leapt out to a 3-0 lead in the top of the first and never let go, beating Laredo 9-3. In the first inning, 1B Kyle Nichols drove in the team’s first run with a sacrifice fly. Then, DH Jairo Perez hit an RBI single and 2B Felix Molina drew a bases-loaded walk to make it 3-0. If not for an inning-ending double play, Kansas City might have done more damage in the first, but they had plenty left in the tank.

Holding a 4-3 lead, the T-Bones gave their bullpen breathing room with a four-run seventh inning. 3B Matt Padgett drove in the rally’s first run with an RBI double, and later in the inning, Molina cleared the bases with a three-RBI double. Padgett would add an RBI single in the eighth to cap the 9-3 win. He batted 4-for-5 with two RBI and two runs scored. Molina was 3-for-4 with four RBI.

RHP Dustin Loggins (4-3) supported the T-Bones with six innings of three-run ball. He struck out four and walked two in the win.

The game between the Amarillo Sox and the Wichita Wingnuts was suspended after six complete innings due to rain. The teams will resume play in the top of the seventh tomorrow at 6 p.m. After completion of the suspended game, the teams will play a full nine innings, as scheduled.

Photo courtesy of the Fargo-Moorhead RedHawks