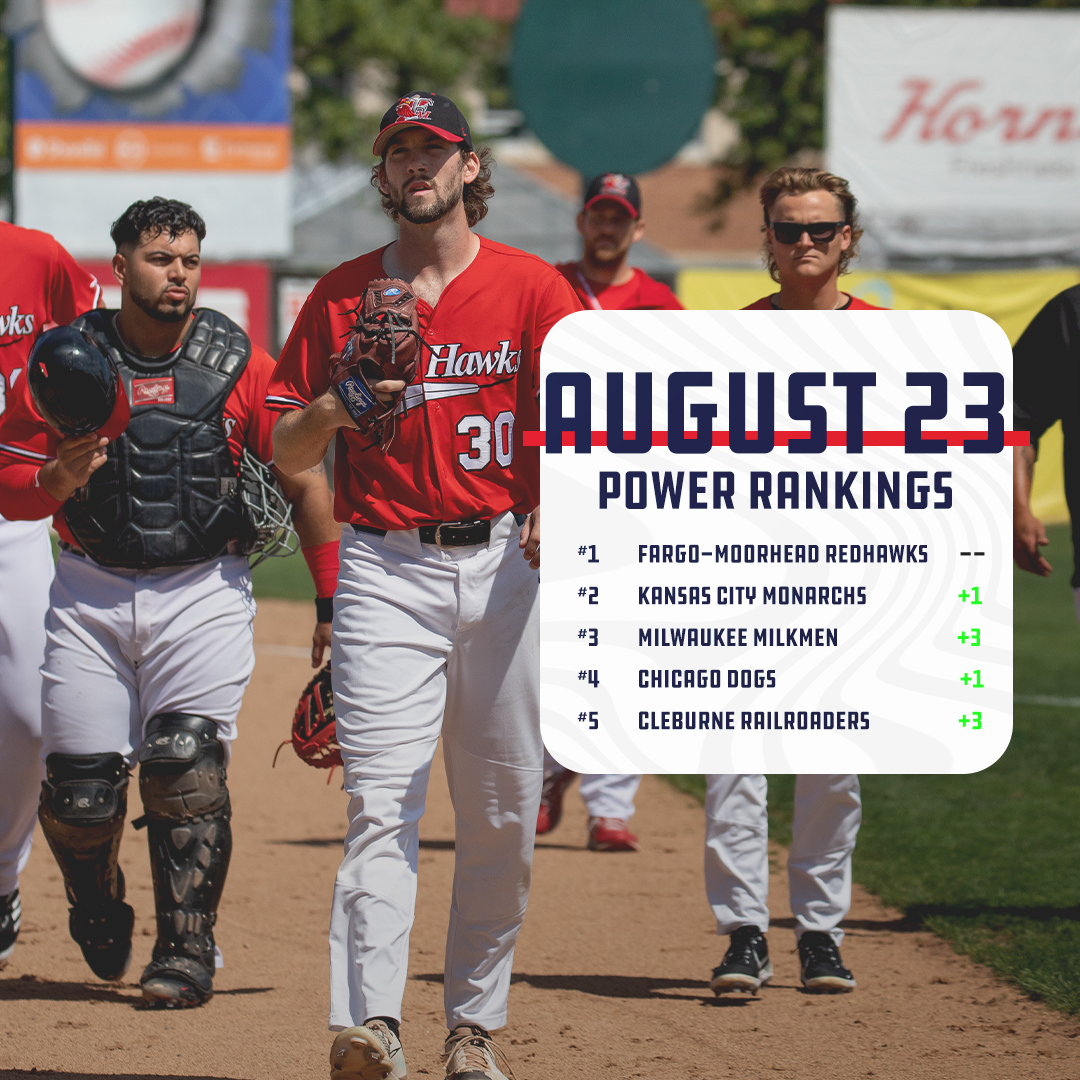 The RedHawks maintain the top spot in my rankings after they became the first AAPB team to clinch a playoff berth with a win over Sioux Falls on Thursday night. That win was part of a nine-game winning streak for Fargo-Moorhead, and though the run came to an end in Chicago on Sunday, the RedHawks still look like the team to beat in the Association. John Silviano earned Pointstreak Batter of the Week honors after driving in a league-best 11 runs over the week, and the RedHawks’ pitching staff remains elite. Now the fight for the number one seed is on, with a Labor Day weekend series against Kansas City looming.

We’ve got a couple weeks left in the regular season, but these Monarchs have already left their mark on the Association history books. A solo homer from Jan Hernandez Monday night marked Kansas City’s 148th home run of the year, breaking the all-time AAPB record set by… last year’s Kansas City Monarchs. Though the home run came in defeat, things are looking up in KC. The Monarchs got a huge sweep of Winnipeg on the road to kick off the week, putting plenty of breathing room between them and the Goldeyes. They’d go on to clinch a playoff spot. Still, Joe Calfapietra’s team will be focused on closing the gap to Fargo-Moorhead in time for the final series of the year.

Don’t look now, but the Milkmen are on the charge. Milwaukee has won seven of its last nine games, including a home sweep of Sioux Falls over the weekend that put them ahead of Kane County in the East Division standings. Bryan Torres’ .391 season average continues to make headlines, but there are other big contributors as well. Will Kengor has three home runs in his last seven games, driving in eight over that stretch. And Aaron Hill, one of the more underrated players in the AAPB, posted an eye-popping 1.236 OPS over that same period. The pitching staff has been inconsistent, but if arms like Myles Smith (who threw 8 innings of one-run ball on Sunday) can find their groove, watch out.

Wins have been difficult to come by for the Dogs as of late, but there are encouraging signs. They took two of three from Kane County on the road, pushing away a fierce challenge from the Cougars for the top spot in the East. And though they dropped a pair of one-run games to Fargo-Moorhead to start the weekend, they earned a 6-0 victory to close out the set on Sunday. The Dogs have seven games left in a homestand that could define their season. There’s still plenty of time to re-assert their dominance of the division.

The fifth spot is tricky this week, but I’m going with the club that might be the hottest in the league. Logan Watkins’ team played their biggest series of the season to date in Gary this week, and came away with three huge Ws. While Tuesday’s game was a tight 3-2 victory, the Roaders outscored the RailCats 26-6 over the next two contests to take over the final playoff spot in the East. Cleburne followed that up by taking two of three over Kane County on the road. For whatever reason, Cleburne has thrived away from home, going 23-20 on the road and 16-27 at The Depot. They’ll look to keep that up when they kick off a huge four-game series with Chicago Tuesday.