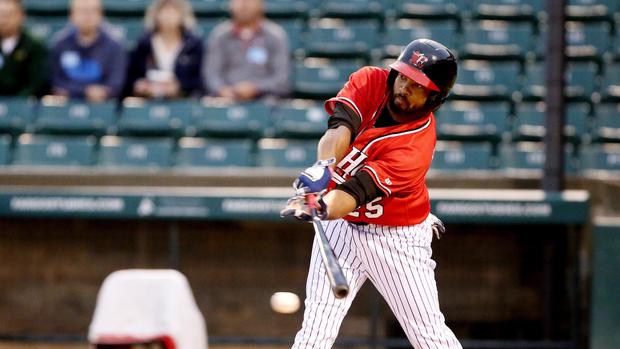 Image: The Forum of Fargo-Moorhead

DURHAM, NC.— On the verge of beginning his second season roaming the outfield for the Fargo-Moorhead RedHawks, Keury De La Cruz received the news that he would not be accompanying the RedHawks on their season-opening trip to Texas. Instead, De La Cruz is headed back to affiliated baseball, as the Seattle Mariners have purchased the contract of the 25-year-old Dominican Republic native. Seattle is expected to assign De La Cruz to the Class AA Arkansas Travelers of the Texas League.

De La Cruz’s time with the RedHawks and in the American Association was limited to the 2016 season, but he left a lasting impression on the league — especially opposing pitching. De La Cruz hit .316 (137-for-433), amassing 32 doubles, 18 home runs and 72 RBI. Those numbers ranked De La Cruz among the league leaders in multiple categories, as his 137 hits, 50 extra base hits, and 32 doubles were tops in the American Association. Additionally, his 72 RBI were fourth-best among AA hitters, and his .316 average placed him ninth in the Association.

Earlier in the 2016 season, De La Cruz was named as the American Association’s Pointstreak Player of the Week for the week ending May 29. Over the course of that week, De La Cruz hit .400 (10-for-25), but his performance in the RedHawks’ May 27 game against the Wichita Wingnuts truly earned him the award. In a 13-3 win, De La Cruz went 4-for-5, belting three home runs to go with a double and a whopping eight RBI. Both the home run and RBI marks were the highest for an individual in a single game in the American Association in 2016.

De La Cruz came to Fargo-Moorhead from the Boston Red Sox system, where he played from 2009-2015. He played the entire 2014 and 2015 seasons with the Class AA Portland (Maine) Sea Dogs, the highest level achieved in his tenure with the system. 2012 was a banner season for De La Cruz, as he accumulated an affiliated career-best .307 average and 20 home runs playing with the Class A Greenville (S.C.) Drive and the Class A-Advanced Salem (Va.) Red Sox. De La Cruz drove in 87 runs that season, a number only eclipsed by the 89 he amassed in 2013, a season spent entirely with Salem.

The RedHawks will open their 2017 campaign tonight, Thursday, May 18, at the Texas AirHogs. First pitch is set for 7:05 p.m. Central time at AirHog Stadium in Grand Prairie, Tex., and the game can be seen live and for free at www.americanassociationbaseball.tv.